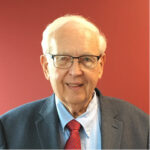 Walter joined our firm as Of Counsel in 2019. For the past twenty four years Mr. Dawson has served as a Patent and Trademark Attorney for Pearson & Pearson, where he represented various clients with intellectual property matters in electrical, mechanical, computer and many other technology areas. Previous to that, he was a member of the design team that developed the Apollo Spacecraft Guidance Computers and the Trident Missile Guidance System Computers at Raytheon Company and he was a principal engineer and patent attorney for Raytheon Company. Mr. Dawson also specializes in Patent and Trademark infringement for enforcement of patents and trademarks.

He is a graduate of Suffolk University Law School (J.D. 1976), Northeastern University (MSEE, 1965) and Lowell Technological Institute (BSEE- Now University of Massachusetts – Lowell, 1959). He was president of the Boston Patent Law Association in 1999. He is a current member of the Greater Lowell Bar Association, New Hampshire Bar Association, and the Institute of Electrical and Electronic Engineers. As well as, a current Board Member of the Independent University Alumni Association of Lowell and the UMASS Lowell Industry Advisory Board for the Electrical and Computer Engineering Department.

He resides with his wife Mary in both Nashua and Laconia, New Hampshire.