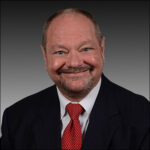 Attorney David A. Rardin is a member at Maine Cernota & Rardin. David began at the firm in 2006 as a patent agent. Since 2007, he has been licensed in Massachusetts and New Hampshire as well as before the United States Patent Office.

Attorney Rardin earned his B.S. in Physics from the University of Massachusetts, Lowell, and his J.D. from the Franklin Pierce Law Center now University of New Hampshire School of Law in Concord, NH. He is a US Air Force veteran and has more than 20 years of pre-law science and engineering experience. Areas David has worked in comprise: MEMS devices, infrared and microwave systems, optics, nuclear technology, ocean modeling, business methods, computer hardware and software including wireless and internet technologies, network security, cognitive radio and multiuser detection communication systems.

Outside of the firm David spends his time in the White Mountains and on Plum Island with his wife and Newfoundland dogs.